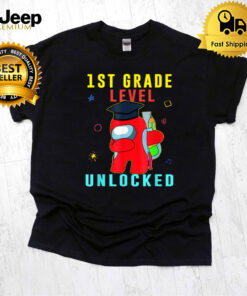 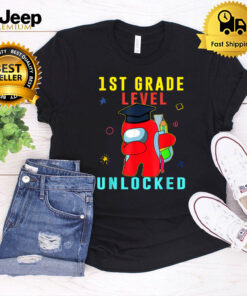 Throughout the campaign similar things happened, where I would tell the DM I do something I thought was reasonable 1ST Grade level unlocked Dabbing Amongs Us Back To School T-Shirt, but considering it wasn’t progressing his perfect plot he was annoyed. Once, we came to this city of thieves and found it empty. Hoping to finally get some better gear, I ask to loot the place. The DM gets visibly annoyed but allows me to anyway, I go to one store and find nothing. I ask to loot the next and the DM gets more annoyed, and again nothing. I should have stopped here, but I seriously can’t stress how boring combat is when your rounds consist of rolling a 13 to hit (without modifiers) missing, and then waiting half an hour as the 30 guards (as guards were literally all we fought) beat the shit out of you. I was eager to get something to make me stronger, so I asked to loot some more and the DM just threw his arms in a huff and said I found like 1000 gold. This would be great if later that session the DM said he wouldn’t be using money as he found it boring, and would just have us find better gear. We never did.

Later we were helping a quest NPC and he appears out of nowhere and just one shot kills this demi-god NPC with a bow, none of  1ST Grade level unlocked Dabbing Amongs Us Back To School T-Shirt  can do anything to prevent it. We run combat, and despite him almost destroying us, we get him down. We tie him up and someone casts hold-person on him so that we can question him. I wanted to kill him outright since he killed our ally, but Sam protested. When he finally awoke he just cast some spell and disappeared. Sigh….Ok.

We encounter him again when he ambushes the party, almost killing another friendly NPC, this time with a fire elemental as back-up. We get him down again, and this time I decide to finish the job, so he can’t stabilize and then just teleport away. When it gets to my turn, instead of attacking the fire elemental, I stab him to give him 2 failed saves.