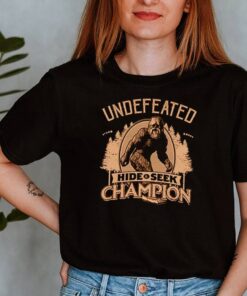 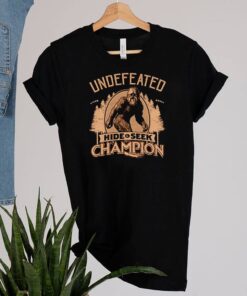 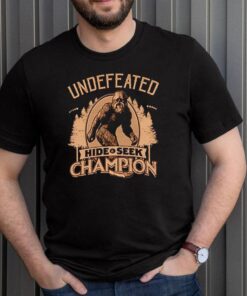 Three males fighting alongside each other perform the most admirably, uniting their Bigfoot undefeated hide and seek champion shirt to form the Kessu’s mightiest phalanx. Ruuki, Felabi, and Rags all wield their Thunder Gauntlets like practiced veterans of countless wars. Rags, once a scrawny little fellow too timid to fight, now strikes a valiant pose before leaping at a giant centipede. Equipped with a pair of Thunder Gauntlets and a combat-level Survival Suit, he uses his tiny, four-foot stature to zip beneath the legs of the other beings fighting around him. He leaps into the air with his species’ trademark agility, kicks off the shoulder of a Kraktol, and pounces toward the terrifying maw of his Buzor enemy.

Rags smacks the centipede’s face, using the strength-amplifying effects of his gauntlet to tear the ugly creature’s head right off the rest of its Bigfoot undefeated hide and seek champion shirt . The teeth-filled skull goes flying into the distance, where it crashes into another group of Kraktol and Buzor. Rags lands nimbly on his hind-limbs and executes a backward-rolling maneuver, deftly avoiding the centipede’s remaining body as it flops to the ground, lifelessly. “Nice shot! Kyargh! Thanks for the assist!” The Kraktol warrior says, giving Rags a thumbs-up. She runs ahead, resuming battle, while Rags takes a moment to join up with Felabi and Ruuki.