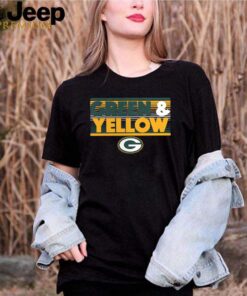 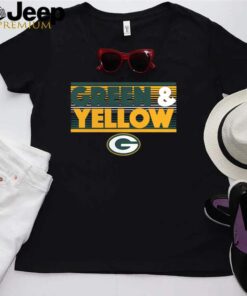 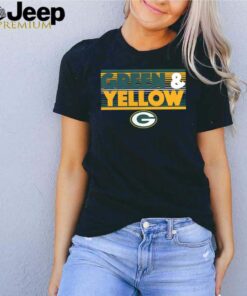 The morning came quickly, soft sunbeams flitted through the cracks in the wood, waking Vivita up from her surprisingly fitful sleep. Her mother moved next to her, turning over and mumbling as she found a more comfortable spot to lay. The little mage stood up, dreading the day ahead of Green Bay Packers Green and Yellow shirt. She would have to get ready for the academy now, if she missed the bus today there wouldn’t be another one this semester. What was a source of excitement in her life now only produced dread for her. How could she show her face with a pet rock for a companion? Surely they wouldn’t even let her in. The school was well guarded but danger could be found at every point in the world, and she needed a companion to protect her.

As the girl passed her school things on the way out, she glared at the Green Bay Packers Green and Yellow shirt. Those tiny round stones had formed a circle around it- did the wizard do that? What a crazy old fool. Did he just scoop up a handful from the riverbed and dump it on me? She thought bitterly. The girl rushed out, pushing the cruel joke as far out of her mind as she could manage. When Vivita returned home, fresh from her bath, she was annoyed to see someone had moved the damned thing back onto her uniform. She went to pluck it off, having half a mind to throw her “companion” before she had even picked it up. If she wasn’t so tired, she may have noticed that the rock felt heavier in her hand than last night.